“The historical Jesus community does not worship; it gathers.”

My college Hebrew professor once woke me up to the dramatic differences between ancient and modern world-views by drawing us a picture of the cosmos as the writer of Genesis understood it. On a dusty green chalkboard he drew a line to represent the ground, then added a half-circle above it to represent the firmament—the vault or arch of the sky. Underneath, he drew a few pillars to hold up the earth, with the space in between representing the world of the dead. Finessing a bit, he added a few windows into the semi-circle, which the gods could open to smell the delicious scent of burning meat on an altar and sprinkle down life-giving water onto the earth in return for the gift. According to the Babylonian epic of creation, the Enuma Elish, which is much older than the Hebrew Bible and on which arguably writers of the Hebrew Bible shamelessly riffed, the firmament was built of the corpse of Tiamat, goddess of creation, who takes the form of water:

Then the lord rested, gazing upon her dead body,
While he divided the flesh of the … , and devised a cunning plan.
He split her up like a flat fish into two halves;
One half of her he established as a covering for heaven.
He fixed a bolt, he stationed a watchman,
And bade them not to let her waters come forth.
(end of 4th tablet)

You might be interested to learn that human beings in the Enuma Elish were created from the blood of a traitor god Kingu, and destined to be servants of the gods at least in part because of this heritage. The Hebrew God YHWH also assumes the servitude of mankind, but—more optimistically, it seems to me—makes us not of blood but of the dust of the earth. In this sense, the Hebrew worldview had more in common with the Egyptians, who for example in one ancient spell described the relationship between god and humans in the following manner:

It is in the body of the great self-evolving god that I have evolved,
For he created me in his heart,
Made me in his effectiveness,
And exhaled me from his nose.
(Coffin Text Spell 75, in Hollis, “Egyptian Literature”: 129)

Each of these stories of who we are, where we come from, and how we relate to ultimate reality in turn shape our values. It is to such varying understandings of god, the cosmos, and human meaning—in a word, theology—that David Galston turns in chapter 8 of Embracing the Human Jesus, which we have been reading for the past several weeks on this blog. Galston’s whole project has been to ask what would happen if we tried to build a community based on the historical, human Jesus. In this chapter, David asks if we bracket and set aside the idea of a divine being clothed in human flesh, and let Jesus just be human, how would it change our theology? 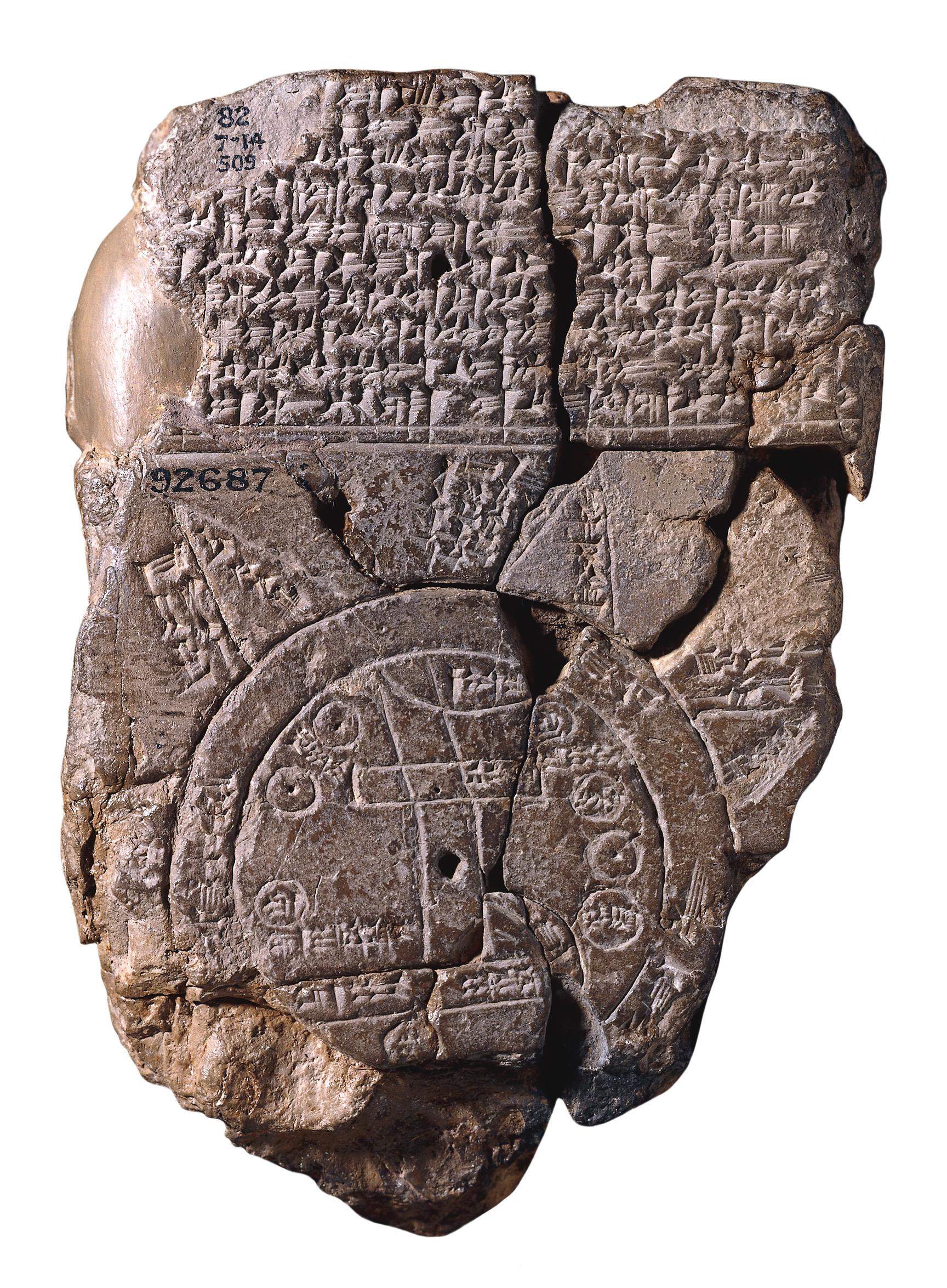 Courtesy of the British Museum. Clay tablet; map of the world; shows the world as a disc, surrounded by a ring of water called the “Bitter River”

We don’t live in a world that is quite as small as the one envisioned by ancient Mesopotamian peoples. To put it in Galston’s words, “Sometimes ancient problems, even when explained with modern sensibility, remain ancient problems” (181). We can’t make the ancient view of the heavens fit ours. There just isn’t a divine corpse up there holding back the waters of chaos. We’ve gone up and looked around; we know! What’s up there is a dark, cold space punctuated by light. We can still feel awe when we regard it, sense beauty in its formation, and desire to know it. What we can’t do necessarily is worship it as divine.

Galston is arguing that, in the same way, “a word like sin may not be just outdated, it might be a fundamentally flawed way to think about life” along with notions of Jesus as a divine savior and divine intervention in human affairs (181–82). Another notion that goes to the wayside it prayer, in the traditional senses of supplication and thanksgiving. Although many generations of theologians have found ways to make these notions palatable to modern people, it’s still basically the remains of a bygone era. What makes more sense now is to replace the language of God with the language of life, as philosopher Don Cupitt has argued. Although individual people may hold onto these notions for psychological reasons such as the comfort it brings, or out of nostalgia for family and cultural values, Galston urges us to resist this temptation especially in the public sphere, and most especially in church:

All of these expressions deflate the community experience by directing the collective will away from history and from authentic language about life. … An imperative of the historical Jesus community must surely be that the language of the community needs to be directed to history, raised from within the solidarity of people, and hold inspiration to act now. (184)

What I found most meaningful in this chapter was the unswerving commitment to this life, and the warning not to escape it by redirecting our attention to an external, possibly nonexistent reality. Even if it does exist, Galston points out, we still have to live life here, now. Importantly, the conviction is for public life. We don’t worship; we work. I stumbled here on the realization that we often informally define religion itself as involving an attitude of worship. Buddhism, Taoism and other world-views are frequently described as “philosophy” instead of “religion” on this premise. If there’s no worship going on, is it still religion? The next chapter of Galston tackles that question. For now, we are charged not to hope but to act, as in the example of the Good Samaritan: “It is not about a world where someday there will be no enemies; it is, rather, the practice of compassion that shatters the present world of enmity” (185).

From this perspective, the reigning question of life becomes, what actions are you taking that go beyond hope and actually challenge and change a present reality?

This is part of an ongoing series on David Galston’s book, Embracing the Human Jesus. You can find chapter 7 here. Don’t leave the last word to me. Share your thoughts below ↓