A parable is a form of teaching that eludes easy definition. In fact, its intention is to be elusive. Due to its very nature, it is easier to describe what a parable is not than what it is.

A parable is not a pronouncement. It does not claim that the world should be one way rather than another. It is not a moral lesson. It is not a description of a second or supernatural world. A parable is built on the images of the everyday world but reconfigures the everyday world. It opens a seam or a glimpse to an alternative world and an alternative way of reasoning in the world. In this sense only does it describe a different world or the world seen differently. However, it never leaves this world. It simply re-orients this world through its description of a happening that never really happens.

The Parables of Jesus

The parables of Jesus are rooted in the everyday world. Someone loses a coin. A truant child returns home. A gardener sows mustard seeds. A group of day laborers are waiting for a call. A man travels alone down the dangerous road from Jerusalem to the wealthy villa of Jericho. A woman conceals leaven in flour.

In each story the expected happens, but at the same time the unexpected happens. An altered version of reality arises from the usual to make us laugh or scratch our heads as if impacted by comic relief—which is sometimes no relief at all. It can also be very acute, making a strong political or social comment by way of a sharp contrast. A woman searches all day and finds a coin. That’s common enough. We have all searched diligently for something of value to us. Then, she throws a party to celebrate her luck. The cost of the party is far in excess of the value of the coin. What she has found is more than lost again. In fact, in the practice of ancient hospitality, the result of the party is likely debt—which will either earn her friends or deliver her to destitution. We might ask, is she crazy or brave? The unexpected ending is a plays on the comic-tragic hope that to lose what is found is to find even more.

It is rather expected that if you are silly enough to travel unaccompanied down a dangerous road, you’ll likely fall among thieves. The unexpected is that the hero in this story turns out to be a Samaritan. A Samaritan is the enemy. Yet in this story our enemy practices loving kindness better than we do. Our enemy teaches what it means to love our enemies. Think. The Samaritans have a Torah, a mountain, and a God different from our Torah, mountain, and God. They are not supposed to get it right because they got it wrong! But this story shatters our prejudices directly. Then there is the comedy of the aftermath that we can only imagine. Once again, given ancient customs of hospitality, imagine the Judean in this story who will return home to announce, “Guess who is coming for dinner?” 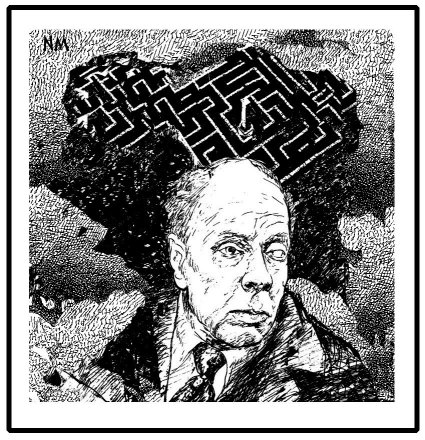 Franz Kafka and Jorge Borges are two 20th-century writers who used the art of parable. They told stories that on the surface are plausible but that, in the course of their telling, point toward the unexpected, inexplicable, and unimagined. Yet, the unimagined part of the story causes the re-evaluation of the world order and meaning in life.

Kafka has a story about an estate holder who takes a trip on a horse out to the countryside. At the gate, the manager of the estate wants to know where the master is going. These are common images on an estate in or around early 20th-century Prague, where Kafka lived. The response to the query is “out of here” or “away from here.” The estate holder says that he is going “out,” plain and simple. He has no explicit destination.

The response of the estate holder converts the common scene to a parable. We suddenly see that if we are to understand the story we have to change the initial impression of what is happening. We have to change the world we reside in. We have to notice that the servant does not understand the master, that the trip in question is not about arriving somewhere, and that the draw to go away from here does not rest on a reason. It’s not about getting somewhere; it’s about becoming in the process of going. That’s an entirely different scene.

Parable is a fascinating form of teaching. It takes the student on a journey of transition, yet once (and if) the student makes the transition there is no longer a point or aim or purpose to the parable or even to life. Life is converted to dance or to metaphor or even to fiction. It is light. It is joyful. It is gift. Describing this transition is extremely difficult since the very act of description introduces purpose or aim back into the parable. The un-parabolic question is to ask why then tell a parable? The parabolic answer is that everything is parable, and the only way to convey this is to tell a parable.

David Galston is a University Chaplain, Adjunct Professor of Philosophy at Brock University in St. Catharines, Ontario, Academic Director at Westar Institute, and academic adviser to the SnowStar Institute in Canada. He is the author of Embracing the Human Jesus: A Wisdom Path for Contemporary Christianity (2012).

The Once and Future God
Once and Future God Video and Twitter Feed (Q&A)
God: The Modern Problem
“Where Have You Laid Him?” An Appeal to Study Christian Origins
Top 10 Archaeological Discoveries Related to Jesus
Reading Embracing the Human Jesus: Introduction
How Well Can We Know Historical Figures? Not a Rhetorical Question (EHJ series)
Seven Hard-to-Deny Limits to What We Can Claim about Jesus (EHJ series)

Okay, Google, How Was the Bible Written?

How to Read Paul’s Letters Chronologically
Scroll to top