What are the top 10 archaeological discoveries related to Jesus? Westar Fellow Milton Moreland, who has served as a Senior Field Supervisor at the archaeological excavation in Sepphoris, Israel, since 1993, set out to debunk some common myths about archaeology and Jesus at the Spring 2014 national meeting.

Moreland, author of Between Text and Artifact: Integrating Archaeology in Biblical Studies Teaching, emphasized the importance of understanding Syria as a region. “To know more about Syria is to know more about Christian origins and the earliest Jesus movements,” he explained. Syria was a hotbed of activity, and was hardly the pastoral idyll so often depicted romantically in stories of Christian origins, in spite of the fact that rural-urban relationships played an important role for Jesus followers. With that in mind, here are the top 10 discoveries in the Syrian region of significance for understanding the historical Jesus.

10. Sebaste (Samaria)
Located in Samaria, this was Herod’s colonial city with Roman temples to Augustus. Herod the Great brought Judea into the Roman world. He was a “client king” and a fantastic Roman administrator, by which we mean he built cities. Because that’s what Roman administrators did: they built cities! Why was this important? Romans had perfected the Greek art of building cities as a way to spread culture, as other discoveries discussed below will highlight further.

Herod built three temples, one of which was right in the center of Sebaste, placing the Roman imperial cult front and center for visitors there. Sometimes we hear people minimizing the importance of the imperial cult. In fact, Jesus was surrounded by it. The very rocks imported to build the cities provided a physical representation of the empire. These magnificent cities even looked like Rome.

9. Caesarea Philippi
This is mentioned in the Bible, where Jesus had a picnic with his crew. What’s so interesting about this site is its celebration of the god Pan with massive building projects. An important theme here is the evidence such sites provide of the Roman Empire’s active efforts to build monuments to gods other than Yahweh.

8. Capernaum
Capernaum presents a strong contrast between the cities described above and the villages typical to individuals like Jesus. The life of the village continues amid the building projects of the empire. We can ask ourselves, what’s it like to live in a village like Capernaum while Herod is building massive Tiberius not too far away? Just look at the construction of the buildings as revealed by excavations. Capernaum houses were built of unhewn basalt rock, to which residents might have added limestone plaster. So on the one hand we have imported rock recreating Rome, and on the other we have houses of unhewn basalt. Quite a contrast.

7. Early Roman Jerusalem
This was a city under construction even up until the destruction of the Temple in 70 CE. Herod expanded the Temple Mount three times over during his rule—a hint, incidentally, that he was playing up relations with both the Romans and the local Jewish communities. Nevertheless, Jerusalem is a Roman city. It hosted the Olympic Games. It had colonnaded streets. It was Roman, but with a Jewish temple. What’s more, the Roman military was stationed in Jerusalem and guarded the Temple, which also happened to be the bank.

After its destruction in 70 CE, Jerusalem was essentially abandoned from 70 to 115 CE, at which point it was renamed. This was experienced by early Jesus followers: the obliteration of Jerusalem and eventual conversion of it into a Roman colony.

6. Dead Sea Scrolls
This is where Westar’s work has proven to be very important, in that it has focused on putting the Jesus movement into the broader context evidenced by the Dead Sea Scrolls. Through this discovery we have learned that groups contemporary with the Jesus movement, but who may not have had contact with one another, nevertheless shared certain features in their responses to the pressures of the time. The Dead Sea Scrolls give us the earliest texts we have, dating from the first century BCE onward. Importantly, the Dead Sea Scrolls give us a microcosm of one small community, enabling us to glimpse a story of who they were. Qumran, where the scrolls were discovered, laid undisturbed for 1900 years. It’s hard to quantify how valuable that is in archaeological terms.

5. Caesarea Maritime
Herod built a breakwater and this massive, monumental city on the coast. Underwater archaeology at Caesarea has been one of the most interesting archaeological methods of exploration in the past 20 years. We’ve learned that this was the busiest port on this region of the Mediterranean. This provokes us to ask: why urbanize the region by building cities like this? Caesarea Maritime, like many other newly constructed cities, had no natural access to fresh water, requiring engineers to design aqueducts to carry in fresh water long distances, yet Herod still demanded that it be done. 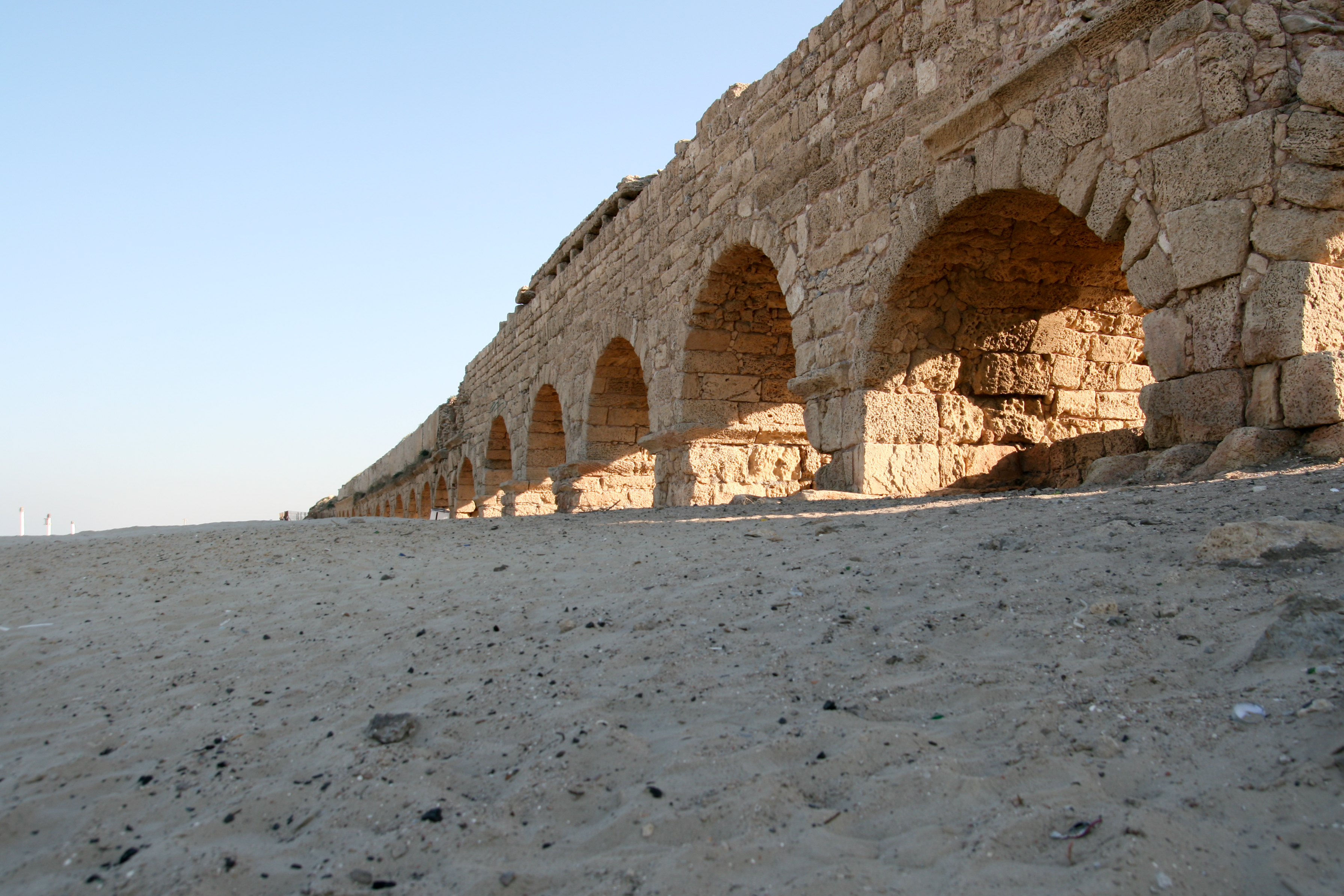 Reinforcing what we see in other cities in this era and region, Caesarea Maritime looked exactly like any other Roman port city, with a temple to Augustus, and yet here it stood just 30 miles from Galilee. It’s as though the Syrians were crying out, “Look, we’re Roman! We’re just as (or even more) Roman as the Romans!” Roads, aqueducts, temple and palace: these were signs of Rome that dominated the landscape. Why build colonnaded roads, after all? A basic road would have been serviceable, but the grand columns provide a wow factor. Why built aqueducts along beautiful beaches? To assert Roman control over nature. This new port city also came to control trade in the region with tariffs as high as 25 percent: imperial presence coupled with control of trade.

4. Sepphoris
Sepphoris is now a national park dedicated to archaeological excavation. It’s a major city just three miles from Nazareth, and is located on a natural hill overlooking the region. It dominated the landscape until its destruction in an earthquake. We now know fifteen to twenty thousand people lived there in the time of Jesus, making it not much smaller than Jerusalem and a strong presence in the Galilee. While there weren’t massive Roman temples in this part of Galilee, Sepphoris still represented a Roman city with the usual colonnaded roads, aqueducts, walls, and theater.

One discovery of note in Sepphoris is a wealthy Jewish home that shows Roman influence through features like a mosaic of a drinking contest between Hercules and Dionysus. It also features the so-called “Mona Lisa of the Galilee.” This suggests another helpful lesson on this era: To be Roman was to keep your indigenous, local traditions while still incorporating the Roman, urban atmosphere of the times.

3. The Galilee Boat
The Galilee Boat, which was found between Capernaum and Tiberias, is made of many different kinds of wood, suggesting it was kept over multiple generations and patched with whatever wood was available to the people who used it. It was nicknamed the “Jesus boat” because it could hold about 13 people. At the same time the fishermen who used this boat were patching it to make it last, brand new Tiberias was being constructed with imported stone. As with Capernaum, this discovery emphasizes the incredible contrast between peasant life and the monumental efforts of the Empire going on in plain view all around the villages.

2. Jewish Ritual Purity
This topic has come into its own in just the past couple decades. This discovery centers on everyday objects: pitchers and cups that basically promised ritual purity when used (yet were made of chalk, hardly a pleasant item from which to drink your water!). Alongside these everyday items we also find ritual baths everywhere. These did not aid much in terms of cleanliness: there were no drains. Rather, such relics open up a picture for us of an increasing interest in a particular local, indigenous belief system of ritual purity alongside Romanization on a massive scale. We can just imagine members of the local communities asking plaintively, “How do I stay pure?”

1. Caiaphas Ossuary and Crucified Man
These are small yet phenomenal finds, not because they prove anything but because they open a window on a particular past era of interest to us. What the Caiaphas ossuary highlights is a change in burial practices. Previously, people buried their dead in undifferentiated tombs, but gradually we begin to see people carrying out a “second burial” of the dead by returning after a year to corpses to gather up bones into ossuaries, which were small burial boxes. Why were people all of a sudden saving bones?

This is a good example of text and archaeology coming together to tell a more complete story. Changes in material culture often show changes in belief. At the same time individual burial became commonplace, people were writing about heaven and final judgment. These developing theological writings help explain the change in otherwise longstanding burial practices.* Likewise, while we can’t use the discovery of a nail hammered sideways into the anklebone of a man who was evidently crucified to prove that Jesus himself was crucified (contrary to some popular claims), this kind of discovery can help us understand how Romans carried out crucifixions.

*Update 3/21/2014: Jodi Magness gave a presentation on ossuaries on Friday night of the national meeting that challenges the view described above, which has been a well-established view on burial customs. Jodi pointed out that the problem of looking at resurrection beliefs as tied to ossuaries is that ossuaries didn’t contain the full skeletons of the deceased, so they didn’t really solve the problem of keeping individual bodies intact for resurrections. Also, ossuaries were in common use among Romans, who cremated their dead. Even though Jewish people did not cremate their dead, Jodi recommended viewing the practice of using ossuaries as basically a fashion trend; the Jewish elite, who were the ones most likely to use ossuaries, were emulating Herod, who in turn was emulating Augustus. Jodi’s main point in this regard was that we need to be careful not to isolate Jewish culture from surrounding culture. We have plenty of evidence that Jews willingly adopted Roman customs, art, and architecture, including some aspects of burial practices. So, whichever explanation you find most convincing, there are important lessons to be had here about the role archaeology can play in this debate.

Concluding Reflections
Archaeology does not prove anything and everything about the New Testament or about Jesus per se. What archaeology does do is give us a clearer picture of the Roman world. Through archaeological work we have come to realize that Christianity thrived in major cities, not in small villages in rural areas. Villages like Nazareth don’t show signs of Christianization until the 4th century; in other words, they were thoroughly Jewish villages up until Constantine declared Christianity the religion of the empire. Thus, what we can learn from villages is the likely experiences of Jesus and his immediate followers, but for Christian origins we need to turn to the cities.

During his talk Milton Moreland recommended a couple books about the history of this region (warning: they are dense): The Middle East under Rome by Maurice Satre and Roman Syria and the Near East by Kevin Butcher. Many thanks again to Milton Moreland for this introduction to archaeology of significance for the historical Jesus and Christian origins!

The Once and Future God
God: The Modern Problem
“Where Have You Laid Him?” An Appeal to Study Christian Origins
The Stratigraphy of Christian Origins
Rethinking Judaism in the Ancient World
Seeking a Historically Sensitive Story of Christianity
Reading Embracing the Human Jesus: Introduction
How Well Can We Know Historical Figures? Not a Rhetorical Question (EHJ series)
1 reply

Damned Nation: Hell in America from Revolution to Reconstruction The Stratigraphy of Christian Origins
Scroll to top