I had the privilege this weekend of hearing Westar Fellows Pamela Eisenbaum and Stephen Patterson speak about sex and gender in early Christianity at a Jesus Seminar on the Road jointly sponsored with the University Congregational UCC Lecture Series in Seattle, Washington. Pamela Eisenbaum, author of Paul Was Not a Christian: The Original Message of a Misunderstood Apostle, and Stephen Patterson, author of The Lost Way: How Two Forgotten Gospels Are Rewriting the Story of Christian Origins, introduced ancient Greco-Roman and Jewish ideas of gender, and tackled some red-flag issues such as virginity, asceticism, male-male sex, and some early Jesus followers’ practice of cross-dressing (yes, really!). I wish I could pack it all into this blog, but I’ll have to confine myself to the highlights.

Male-Male Sex in Greco-Roman Culture
By far the most fascinating thing I learned this weekend from Stephen was about Greco-Roman attitudes toward male-male sex. Homoeroticism was commonplace in ancient Greece, but of course when you delve into the history, the situation is more complex than that. Properly defined, ancient Greek culture condoned pederasty, or amorous relations between young adult men and boys in their upper teens, and most of the relationships gave way eventually to heterosexual marriages. The intent behind this practice was to develop the boys into proper citizens.

Here’s the catch: there were specific rules around such relations, the most important of which was that male citizens were not to penetrate other male citizens. This rule did not apply to male citizens penetrating women, male slaves, or foreign men. Thus, maleness in this culture was defined not by male-female relations but by dominant-subordinate relations. Any subordinate could be one’s partner, but if one penetrated another male citizen, it was labeled rape and could be prosecuted.

In short, as Stephen explains from a different angle in his 2013 article “David Loves Jonathan,” in the ancient world male-male sex was generally about ownership, not love. We should not confuse this with modern definitions of male-male sex as an expression of intimacy between two partners.

By now you might be wondering about female-female sex. What do we know about it? The answer is, not much. The reason for that is pretty straightforward: it didn’t directly challenge the power hierarchy, so it didn’t get much attention or regulation. Of course, this doesn’t mean women didn’t challenge the power hierarchy in other ways. For example, the early Christian heroine Thecla rejected her arranged marriage for a life of celibacy, cut her hair short, and dressed as a man. Thecla is by no means atypical; she is one of many possible examples we might cite of women in the Jesus movement acting out masculine or asexual roles as a way to express their commitment to mastering human desire for the sake of religious commitments.

As I hope this admittedly brief description of Greco-Roman ideas about gender and sex demonstrates, gender is, among other things, a structure of power. Gender as power manifests in expectations about what a person can or should wear, spaces people are allowed to occupy, forms of speech they can use, and so on. Like all socially constructed concepts, gender holds a different meaning depending on culture, and power is allocated differently depending on one’s gender. We still see this today in areas like government office, church hierarchy, and the arts. Yet to enforce power differences you must define male and female; you have to know which is which. The philosopher Judith Butler, whom I mentioned last week, defines gender as a role to be performed. Early Christ followers operated within the structures of the reigning culture but also challenged them, discovering and shaping new gender roles through experimentation and practice. 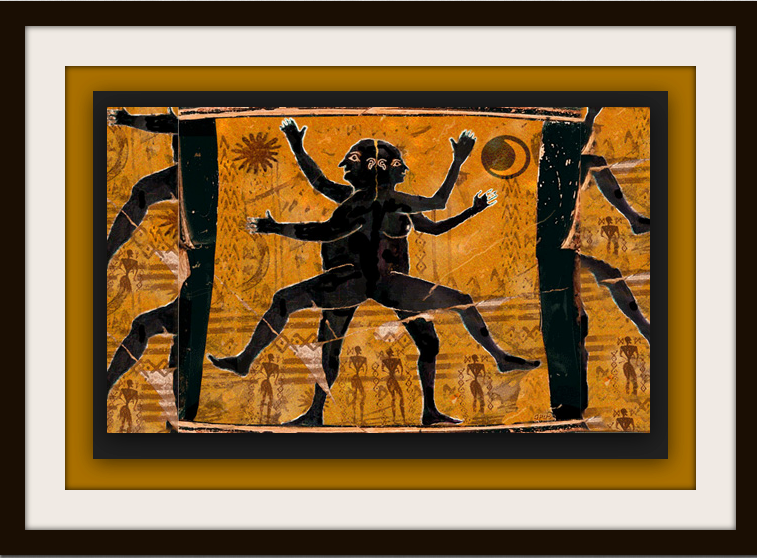 Image of an androgyne, detail on ancient greek amphora, from Plato’s theory of the origin of sexual orientation.

The Body in Greco-Roman Culture
Pamela in her presentation transported us back to a world before Descartes introduced the concept of mind-body separation. Westerners often struggle to return to that world because Descartes’ explanation of the relationship between mind and body as two separate entities, coming as it did at the cusp of the Enlightenment, was so helpful and timely that Western culture has more or less absorbed his language into its basic concepts of existence.

In contrast, words like “spirit” and “soul” in the ancient world did not describe non-tangible entities. Prior to Descartes, psyche and pneuma were substances, like ether. For instance, the Stoic philosopher Seneca says, “Nature (natura) includes things that exist (sunt) and things that do not exist (non sunt).” Would we ever say this? Probably not, because nature in the modern world is specifically confined to the physical universe. We can see that the very models of what a person is and what the fleshy aspects of the self were in ancient times, are not the same as our concepts of them today. Even where Paul describes a “spiritual” resurrection, he still implies a substance of sorts, just not the base material substance (physic).

Queering the Bible
Most of the discussions in the final hours of the lectures today were dedicated to dialogue among participants, Pamela, and Stephen. A couple lessons emerged from this back-and-forth that I thought you also might find helpful in your own reading of biblical and other early Christian stories:

This really only touches the surface of the weekend’s conversations, which were incredibly thoughtful and deep. Thank you to everybody who came out to join us! Last but not least, here are a few resources recommended by Stephen and Pamela for further reading:

Don’t leave the last word to me. Share your thoughts below ↓

Taming Tongues of Fire in the Book of Acts
Marcion: Forgotten “Father” and Inventor of the New Testament
Infographic: What Does the New Testament Say about Homosexuality?
The Sound of an Appalling Love (EHJ series)
Sex, Shame, and the Bible
Christian Martyrs: Neither Uniform Nor Legion
5 Quick & Dirty Rules for Interpreting Paul
8 Tips for Dating Early Christian Texts
10 replies