"Ancient philosophical discourse identified truth with origin, purity and essence. ... True knowledge was knowledge of the beginning, and above all, knowledge of the Divine. History was generally plotted as a story of decline from the moment of pure origin."

—Karen L. King, What Is Gnosticism?

It's pretty well established by now that historians have to be careful not to assume ancient people thought like they did. But there's a less obvious facet of that problem that deserves our attention. Consider this parable from Jack Miles about a pair of twin boys, Benjamin and Joshua, from the preface of Daniel Boyarin's The Jewish Gospels:

Because they are fraternal twins, not identical, they don't look alike, and they are different from one another in other ways as well. Ben is an athlete, a scrappy competitor who makes up in hustle whatever he may lack in raw ability. Josh is a singer-songwriter with bedroom eyes whose second love, after his current girlfriend, is his guitar.

... Being twins, sharing a bedroom since they were toddlers, Ben and Josh know each other quite well. Ben knows—as no one else does—that Josh can beat him in one-on-one basketball. Josh knows that Ben can sing a two-part harmony in a sweet tenor voice never heard outside their bedroom. But what they know about themselves has mattered less and less as time has passed and as a received version of who they are has taken hold in their extended family. ... By degrees, the brothers themselves have succumbed to the family definition. (x‒xi)

Later, Miles says, when a visitor was offered the family album and pointed out photos of the boys in roles that the family had come to associate with the opposite brother, "the family chuckled at these completely out-of-character moments" (xi).

Judaism and Christianity are like Josh and Ben. There was a time when they were not separated so dramatically, and yet over time it became "out of character" for a Jewish person to be associated with one idea, say the belief in a divine son of God, and for a Christian person to be associated with another, say, keeping kosher. As we continue to read Karen King's What Is Gnosticism?, I find this a helpful metaphor for King's cautions about concepts like heresy, orthodoxy, and gnosticism.

King explains that ancient polemicists like Irenaeus and Tertullian used certain social and rhetorical strategies both to create a uniform definition of Christianity and, in the same stroke, to exclude individuals and groups that muddied the waters with different beliefs and practices. While she gives a nod to the role of political power (such as the ability to excommunicate someone), she draws our attention to a polemical tool that doesn't get quite as much attention: the interplay between widespread ancient beliefs about origins and a clever appeal by polemicists to metaphors of genealogy.

This is a crucial point because this rhetoric is still used, consciously or unconsciously, by scholars today in defining gnosticism. More on that in a moment. 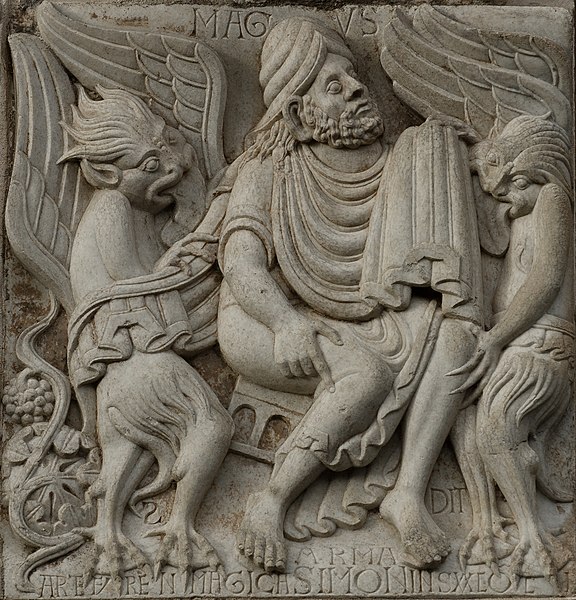 Relief on the Miègeville's gate of the basilica Saint-Sernin in Toulouse. The relief shows Simon magus, demons, and birth of the wine. CREDIT: Wikimedia Commons

First, what were ancient beliefs about origins? As the quote with which I opened this post suggests, according to ancient rhetoric truth was associated with a pure origin, and an associated belief that everything deterioriates from there. This attitude toward history had a powerful influence on Christianity through the work of polemicists, who cleverly appealed to biological metaphors of "like follows like" to claim that "true" teachings led from the twelve apostles and their inheritors, while "false" teachings led from mistaken individuals like Simon Magus, as infamously depicted in Acts 8, to whichever individuals or groups a given polemicist wanted to attack in his own era. In other words, there was a genealogy of truth leading from God and a genealogy of falsehood leading from Satan, with certain iconic figures coming to represent one versus the other. As troubling as this is, King observes, "modern scholarship has tended to keep Irenaeus' tactics alive by offering alternative genealogies" instead of challenging the whole model (32).

What all this amounts to, as I understand it, is that we're like the family of Josh and Ben, only we're trusting a couple disgruntled uncles to tell us what we ought to think about how things actually unfolded over the years. And that, as we've become aware of it, we've just grabbed a different uncle.

An awful lot of anxiety is implied by all this shoring up of boundaries while at the same time playing the old-fashioned trick of getting a person to look at the right hand while the left hand acts. Notice that there is no pre-existing orthodoxy to be defended. Rather, the polemicists are themselves creating an orthodox position through engaging with their opponents. They themselves are searching for past figures to represent their immediate problems. It's only in looking back that the result seems inevitable. Yet all this was going on in close quarters. The anxiety underlying these acts is not caused by strangers but by individuals who threatened the immediate identity of the polemicists. King quotes Jonathon Z. Smith on this point: "Rather than the remote 'other' being perceived as problematic and/or dangerous, it is the proximate 'other,' the near neighbor, who is most troublesome" (in King, 25).

Philosopher Judith Butler has written extensively on boundary-making and anxiety about the near "other." Although frequently she addresses this in terms of gender and, lately, political philosophy, one can easily see the connections to the issue we're discussing here. In Undoing Gender she writes,

The Hegelian tradition links desire with recognition, claiming that desire is always a desire for recognition and that it is only through the experience of recognition that any of us becomes constituted as socially viable beings. That view has its allure and its truth, but it also missed a couple of important points. The terms by which we are recognized as human are socially articulated and changeable. And sometimes the very terms that confer 'humanness' on some individuals are those that deprive certain other individuals of the possibility of achieving that status. ... These norms have far-reaching consequences. ... (2)

Contemporary debates about a number of topics in Christianity—such as the role of the Bible and how it ought to be interpreted, gender and sexuality, and appropriate leadership—rest on what beliefs and practices are considered to fall inside the definition of Christianity and which ones don't by those with the power to enforce it. I recognize that some people don't like to hear the phrase "socially constructed" because it suggests these don't have weight or influence in real life, but I can think of several examples offhand of this power to enforce a particular definition of Christianity: a minor whose behaviors fall out of line with the expectations of the head of household can face physical and financial punishment, for instance. On a broader level, Margaret Battin in Ethics in the Sanctuary cites multiple examples of church communities publicly humiliating members who fail to meet their expectations, not to mention shunning, denying resources, and other punitive actions. I remember at Westar's Spring 2014 national meeting when we were discussing hell in American culture, one participant said, "Some of us are still dealing with this in our families. We know people for whom hell is a real, scary place they have to avoid." It's not just interesting history; individuals in families and communities everywhere are still enforcing such beliefs as a matter of course, with, as Butler says, "far-reaching consequences."

I hope it is clear, then, that if we can break free of the orthodox-versus-heresy model, this can lead to a very real impact on the lives of the people around us. We can offer new possibilities not only for understanding the past but also creating a more flexible boundary line for the contemporary church. For those of us outside the church but still affected by it, it can give us the right to say, "It doesn't have to be so." Ben and Josh can be different, and they will still be Ben and Josh. Jews and Christians can be different, and still be meaningful communities; the seeds are still right there in history, waiting to be noticed by the right person, waiting to be nurtured.

Join us in reading Karen King's What Is Gnosticism? (Belknap Press, 2005)

This is the second post in a blog series on Karen L. King's book, What Is Gnosticism? This book will form the basis of the Fall 2014 Christianity Seminar in San Diego concurrent with the Society of Biblical Literature conference. Don't leave the last word to me. Share your thoughts below ↓

Want to join the discussion?
Feel free to contribute!

New Blog Series on Karen King’s What Is Gnosticism? Sex and Gender in Early Christianity
Scroll to top