You are here: Home1 / Biblical and Theological Reflections Blog2 / Manichaean

Last week we left off our reading of Karen King’s book What Is Gnosticism? with the problem of historians ignoring and distorting data for the sake of protecting the exalted status of whatever they believed to be true Christianity. They let theological concerns get in the way of historical ones. The most damaging idea introduced by this generation of scholars was the gnostic redeemer myth.

A heavenly being is sent down from the world of light to the earth, which has fallen under the sway of the demonic powers, in order to liberate the sparks of light, which have their origin in the world of light, but owing to a fall in primeval times, have been compelled to inhabit human bodies. This emissary takes a human form, and carries out the works entrusted to him by the Father; as a result he is not cut off from the Father. He reveals himself in his utterances (‘I am the shepherd’, etc.) and so brings about the separation of the seeing from the blind to whom he appears as a stranger. His own harken to him, and he awakes in them the memory of their home of light, teaches them to recognise their own true nature, and teaches them also the way of return to their home, to which he, as a redeemed Redeemer, rises again. (Bultmann, Die Religion in Geschichte und Gegenwart).

Bultmann, like other scholars of his generation, believed the gnostic redeemer myth to be a pre-Christian myth appropriated and transformed by Christian evangelists like the writer of the Gospel of John (Hammann, Rudolf Bultmann: A Biography: 319). Most of you will be familiar with the Christian version, as can be read in the second paragraph of the Nicene Creed:

I believe … And in one Lord Jesus Christ, the only-begotten Son of God, begotten of the Father before all worlds, God of God, Light of Light, very God of very God, begotten, not made, being of one substance with the Father; by whom all things were made; who for us men, and for our salvation, came down from heaven, and was incarnate by the Holy Ghost of the Virgin Mary, and was made man, and was crucified also for us under Pontius Pilate; He suffered and was buried; and the third day He rose again according to the Scriptures; and ascended into heaven, and sitteth on the right hand of the Father; and He shall come again with glory to judge the quick and the dead; whose kingdom shall have no end. 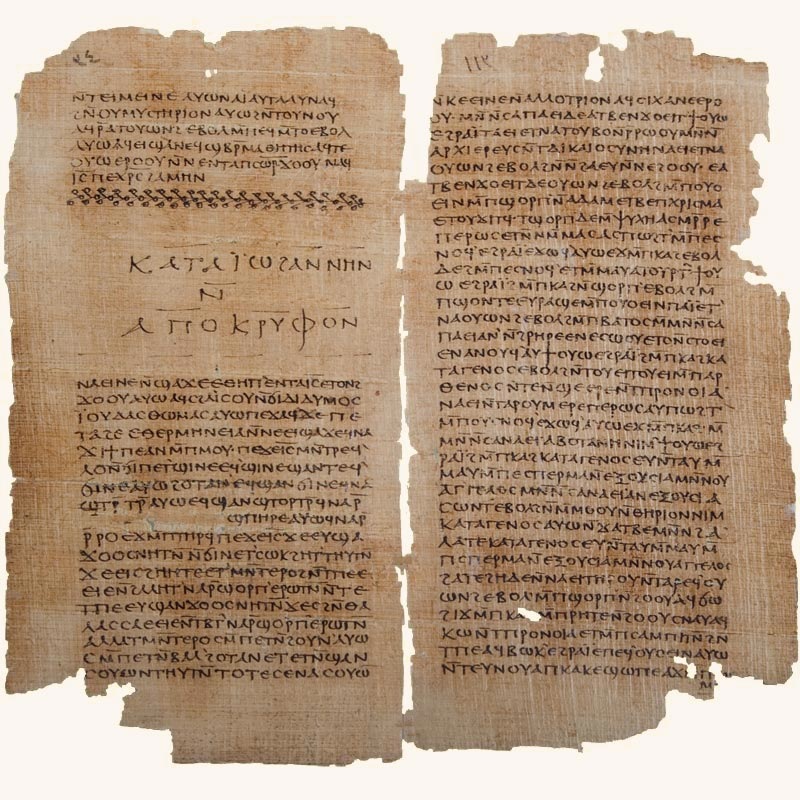 King questions whether the Apocryphon of John, pictured above, should be understood as an example of gnostic alienation, as Jonas believed, or a social critique of imperial violence. Photo credit: Wikimedia Commons.

The gnostic and Christian myths mostly differed “in what each conceived to be the root cause of the problem [of the human situation]. For Gnosticism, it was fate; for Christianity, sin” (King, 105). Often viewed as a direct competitor with the Christian redeemer myth, the gnostic myth was deemed “an alien parasite whose infestation produced the heresies of Christian Gnosticism” (109). Scholars were able to assume this in part because they assumed a master narrative in which Jesus delivered an original, “pure” doctrine to his disciples that was later corrupted (111).

In chapter 5 of What Is Gnosticism?, Karen King introduces three scholars who became increasingly critical of earlier claims about gnosticism, especially the redeemer myth: Walter Bauer challenged the notion that “heresy was a secondary development in the history of Christianity” (110). Christianity “did not look the same everywhere” (112). Whatever form Christianity took in a given city or region, that was Christianity to those communities. There was no model or protocol for how Christianity ought to be until several generations later. Hans Jonas challenged the history of religions school’s obsession with tracing the origin of gnostic ideas as though a movement could be defined merely by the sum of its parts. “Myth demands interpretation,” he believed (128). We can engage myth on a psychological and philosophical level rather than merely dissecting it. Carsten Colpe dissected faulty assumptions in past studies of gnostic texts, such as the fact that no single text tells a complete version of the myth, and that the Jewish “Son of Man” from the book of Daniel cannot easily be tied to redeemer figures in Manichaean and Mandaean traditions.

While the work of this later generation of scholars carried forward some of the prejudices of the past, such as the assumption that gnosticism was immoral and inferior, their “enduring work” has been “to emphasize the multiformity of early Christian phenomena, as well as to demonstrate irrefutably that Christianity and Judaism are integrally entwined in a wider historical and cultural matrix” (148). This laid a crucial foundation for the further upset of assumptions about gnosticism that was to come with the discovery of the Nag Hammadi manuscripts.

More on that next week as part of the Westar Christianity Seminar discussion of this book at the Society of Biblical Literature conference in San Diego!

This is the fifth post in a blog series on Karen L. King’s book, What Is Gnosticism? This book formed the basis of the Fall 2014 Christianity Seminar in San Diego concurrent with the Society of Biblical Literature conference. Don’t leave the last word to me. Share your thoughts below ↓